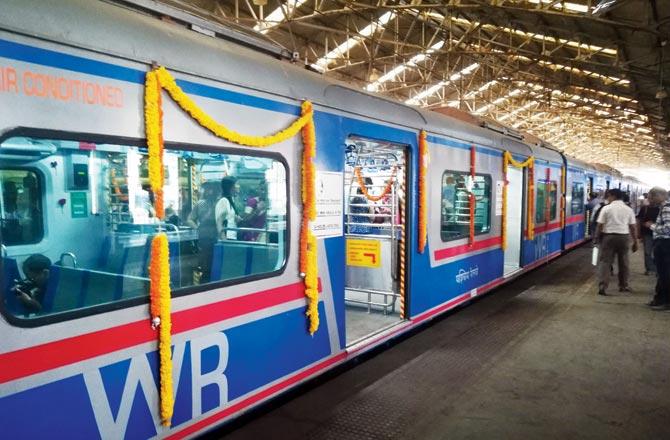 Highest Average Air Quality in Mumbai in 2017 was 186, a 40% increase over previous three years. In 2018, WHO ranked Mumbai as 4th most polluted megacity in the world, up one rank over previous year. WHO goes on to declare that 9 out 10 people in Mumbai breathe unhealthy air.

On most days, Mumbai is engulfed in thick smog, with visibility at a bare 4 km – see pictures alongside. (Air quality in New York rarely touches three digits, visibility is at 16 to 25 kms on most days. Delhi however fares far worse than Mumbai on both parameters).

Unfortunately, the state government has decided to spend thousands of crores to make air quality worse. Yes, you heard me right!

It’s evident from above arguments massive road-infra development has taken precedence over trains, the life-line of Mumbai. Expectedly, the lopsided approach has brought little relief to millions who commute everyday in Mumbai, whether by train or by road.

Massive upgradation of road infra has been a direct invitation to people to buy and use private vehicles. Given Mumbai’s hot and humid weather through the year, who wouldn’t prefer comfortable, air-condotioned commute, at least to work? As neither local trains nor BEST are able to meet these needs, people have switched to their personal cars, howsoever slow and painful the daily commute might be.

Rising incomes and ease of buying personal vehicles have also given a big fillip to changing preferences. More and more people can now afford

to use their personal cars on a daily basis. Mumbai, in fact, would have an estimated 5-7 lakh daily car users. (Approx 6.5 lakh vehicles enter Mumbai from three entry points every day – Vashi, Mulund and Dahisar). Though most of them crib about long commute and slow-moving traffic, none will be willing to abandon the luxury of an air-conditioned car. Unless, they are offered a far cheaper alternative.

AC Local, Metro and mono-rail between themselves can easily wean half of these commuters from their cars. Such shift will progressively de-congest our roads and make driving for the fewer who undertake it a pleasure. You already know how smoothly traffic moves during holidays, when significant number of private cars are off the road! This could be an everyday affair. And get progressively better.

The government, rightly so, is working on strengthening the rail network; the full impact of metro and monorail services should be visible probably by 2024.

However, by simultaneously announcing a coastal road project to connect South Mumbai to Malad through an over-sea bridge along the western coast, the government has taken the opposite route. The project will kill Mumbai as we know. Imagine, a colossal Rs.15,000 crores being spent to kill Mumbai. Yes, 15,000 crores! We know from experience, the cost will continue to escalate, may easily cross Rs.25,000 crores by the time the project hits the finish line!

Why the coastal road will kill Mumbai?

On the other hand, if funds meant for costal roads can be easily redeployed to replace half of our 191 local trains with AC rakes, we’ll see Mumbai make serious progress towards cleaner air and fast, comfortable commute for millions! At Rs.200 crore a piece the investment is barely Rs.19,000 crores – far lower than likely cost of constructing a coastal road.

Without doubt, the benefits of investing in trains far out-weigh investment in coastal road. Besides directly benefiting substantial number of 70L passengers local train passengers, it will save the environment.  In fact, a focused strategy of weaning Mumbaikars from private vehicles to confortable AC trains can turn Mumbai into country’s cleanest city! And show the way to others as well.

A critical question remains: Wouldn’t the cars return on roads once they find the ride has become smoother and faster?

This is quite likely. So, the government would do well to replicate Singapore’s model: make personal driving expensive. At least two to three times of what it costs today.  This will force the car users to weigh the pros and cons of driving vs. taking the cheaper, equally comfortable alternate.

New roads only serve a fraction of city’s population, encourage purchase and use of more vehicles, leading to higher levels of pollution, not to mention the congestion. It’s a flawed model. It worked in USA (large country, three times our size, with less than quarter of our population), but failed even in China, which is larger than USA but matches our population. We fail to learn from their experience. We refuse to appreciate that Indian roads have the greatest diversity of vehicles – from cycle to large 20-tyres trucks, with pedestrians               criss-crossing it anywhere they can find an an inch. More roads within cities will  only fuel more congestion and dirty air.

Isn’t it time we walk the phrase we are so proud to associate to Mumbai: Mumbai Meri Jaan.