62 year-old Sudhir Karnik was admitted to a leading hospital in Delhi early this year. He had suffered a heart attack.

The hospital had him operated immediately. Post operation he was shifted into the ICU. As is practice, he was put on ventilators to help him recover.

However, by Day 2, he was still unconscious. The anxious family members doggedly chased the doctors. Doctors were reassuring, “We are trying our best. We are hopeful he will recover soon.”

Even on Day 4 Mr. Karnik was on ventilators. But the doctors continued to assure the family, reiterating that they had tried several different treatments to improve his health. They were hopeful of positive results. Meanwhile, the family members remained on tenterhooks. They were worried, and had also started feeling the financial strain, as the bill had already crossed a whopping Rs.10L!

By Day 7, the family was convinced that doctors were hiding more than they were revealing. They confronted them, insisting they be given a clear  picture. Doctors, however, remained elusive. Repeating the same ‘we are trying our best’ story’, and adding, “We believe we could try so and so treatment, conduct some more tests, etc.” Unconvinced, the family declared to the doctors that that they had no more money.

Within minutes, the ventilators were removed and the patient died. Instantly!

(Actually, Mr Karnik had died on the operation table itself. He was just kept on the ventilators as the hospital wanted to make as much money as possible. It may have been their usual ploy. Maybe they had sensed that the family had plenty of money. And by the way, this is a true story. I have only changed the name to protect identity).

Stop for a moment, and replace Mr. Karnik with Air India. Likewise, replace the leading hospital with Government of India. The family here is ‘we’ – you, me and all other taxpayers, who are paying for recovery of an airline long dead, but kept alive through ventilators.

Air India is beyond recovery. crore for last year (see Balance Sheet). It hasn’t been able to pay salary to its staff on time for months. Forget raise, there have been pay cuts for everyone. For four days, none of its flights could take-off from Kochi as oil companies were not willing to extend the airline any more credit. (It owes over Rs. 4,200 crores to Indian airports, oil companies and vendors). It gets permission to take-off only when it makes an advance payment to oil companies and the airports.

The airline had also given away most of its lucrative routes in 2005 to other airlines as it was unable to fly to those routes. “Huge Traffic Rights to Gulf hit AI”, says a headline in the todays’s (Sept 9, 2011) newspaper.

Take a look at some other newspapers headlines over last few months (I just googled ‘Air India’):

Moreover, Air India is the only Indian airline to report an air crash in Indian skies in the last 23 years. In the month of August itself, its planes have made three emergency landings.

With the whole world talking of its demise, you can well imagine how its staffers would be feeling. I bet their morale is low and they see no joy in their work. Their commitment to service must be depleted.  These are sure-fire recipes for accidents. (Some of the accidents mentioned above are proof.). In airline business, as you know, even 99.99% is not good enough

There is much that’s wrong with Air India. There are many factors that have worked in tandem to bring the airline to this dismal state. I will not go into that.

What I want to share is how the airline can actually turn profitable once ventilators are removed. (This is perhaps the only difference between Mr. Karnik’s and Air India’s stories.)

Once you read my views in light of facts presented, you might agree with me.

Interest is high as the airline has bought too many aircrafts and has taken a loan to buy them. Forget principal, it’s finding it difficult to even pay interest! Worse, it’s even unable to use the aircrafts to capacity

Air India employs about 31,000 people. The number of employees vis-à-vis its fleet are far higher than acceptable level. But we won’t get into that.

The total annual salary bill right now is about Rs.3,300 crore. This is a mere 11% of its total expenses and about 40% of its loss.

The bad news is that Government is scared to shut the airline and sack its employees. Understandable, and I don’t recommend government do that.

The good news is that most staffers in Air India are older than industry average.

So a nice solution would be to ask entire staff not to report to work, yet continue to earn their respective salaries. (Wow! I can see every AI employee’s mouth water at such a suggestion!). Wait! Conditions apply.

Salary is cut by 25%, with no further raise. And, in the event any one takes up another employment, he or she has to quit the airline. Alternatively, employees could opt for VRS.

On being given such an order, I’m sure employees would like to go on a strike. They are welcome – the airline’s operation will not be disrupted, as airline will not be operating any flights!

This works quite well. The salary cost is the only cost Air India will have to bear. This too will reduce every year as people retire. In any case, this will restrict the loss to a maximum of Rs.2500 crore vs. the Rs.7,000 crores it incurs when it operates the flights!

There is more good news.

Once all employees are asked not to report to work, the buildings Air India owns get vacant. These can be rented. The Air India building in Mumbai’s Nariman Point can easily get Rs.40 to 50 crores a month as rental income. My back-of-the-envelope calculations suggest Air India would be able to easily recover substantial share of its salary expense by simply renting all its buildings.

With no airline to operate, no staff reporting to work, the Rs.7,700 crore admin expenses will disappear too. No phones. No air conditioning. No electricity. No car pick-ups. No nothing!

There is yet another good news:

Air India has two divisions that actually make money. Aircraft maintenance and ground handling – duties it performs for itself as well other airlines. These two divisions can be hived as separate companies. Once out of Air India’s shadow, these companies can actually become more profitable, thus contributing enough to make Air India profitable again. Click here to read about it.

If you add all this up – no fuel cost, no admin cost, reduced salaries and leased or returned aircrafts and two profitable divisions making more money – Air India may actually live another day. Actually, continue to live profitably, with none of the employees laid off. 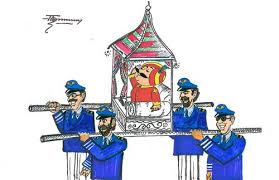 The only tragedy will be that Air India won’t fly anymore. But then, why should we anyway lament AI not flying – it already scores the lowest ranked among all airlines operating in India, across almost all the parameters – on-time take-offs, service, load factor. It flies just 1 in every 8 passengers, and 3/4th of that 1 passenger it flies is either a public sector or a government employee, who unfortunately is mandated to fly only Air India. (Secretly, all of them hate to fly Air India, but have no choice.).

By the way, included in its rooster of regular passengers are its 31,000 staffers and their employees, taking over 200,000 flights a year, including many international flights.

I don’t think anyone will ever shed any tears if Air India is shut down. Except of course the Civil Aviation minister – he’ll have to be laid off!