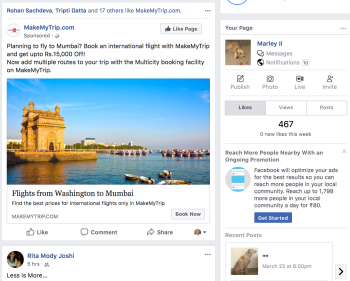 The problem arises when Facebook shows me something – a feature, an image or a video – that doesn’t look or play like a conventional ad. These ads deceive me, as I often end up believing them to be ‘real’. In today’s world such an ad is called content, and the action of showing it specifically to me, based on my profile or my recent browsing behavior, is called content marketing.

First kind is indirectly linked to a product or service where the purpose of content is to influence me to consume or buy it.  For example, short films

that carry a label Royal Stag Big Short Films BagPiper. Or Lifebouy’s film as part of swachh campaign   carries a stamped roti that says Have you washed your hands with Lifebouy.

Or, DBS Chilli Paneer film that is to build its business banking property. Or, a film by Sansung reinforcing its commitment to service. Each of these are paid form of advertising, though they don’t look and feel like ads. They are specifically targeted at me, with a simple aim – to covertly influence my buying behavior.

The second kind of content marketing doesn’t aim to sell me any product or service. It could be quiz or a game or survey. Or, it could be news or information, especially created or curated, to sway mybeliefs, or strengthen my prejudices, often both. The latter is called propaganda. Propaganda means information, especially of a biased or misleading nature, used to promote a political cause or point of view. In the past, such information was delivered via pamplets, or as speeches delivered by leaders and clergymen. Those who were exposed to it, would then share it within smaller groups of friends, family and acquaintances. There are three ways Facebook abets the spread of propaganda:

Let me give you a couple of examples:

A beauty cream can show a film of a real person with real name who gets fairer by using the product and eventually lands up a job with an airline. The content doesn’t mention the name of the cream, though it does show the pack a couple of times. It contains no disclaimer to the effect that this is an advertisement for a particular cream or that the story is fictitious.  The content could be targeted at young, unmarried ladies (picked from profile) who may have been recently browsing ‘fairness’. The viewer can be easily influenced by such content, by not only buying the cream used by the protagonist in the film, but by  also sharing it among other not-so-fair friends of hers. Each click or share also helps the media strengthen the subscriber’s profile (dark complexioned).

A video shows a person beating a cow with a stick. The person looks like a Muslim (beard) and you hear him say, ‘I’ll kill every cow in town’. You read on video date and name of a town and state. The video is targeted at young Hindus boys in the town mentioned on video (picked from profile).  You can well imagine the impact this video could have on the feelings of these young men, as they watch and share it. No one knows whether it’s a true story, or fake content cleverly marketed on behalf of a propagandist for which the media was paid, like any advertising content. Content such as above is pretty common. And not surprising, has become a source of embarrassment not only for Facebook but also for its users.

Yet, one could offer several arguments in favor of Facebook and other media who follow similar modus operandi.

I believe there is one more critical measure FB needs to take \prevent propapaganda from spreading: Any post that uses FB’s paid advertising features to boost viewership comes with a blurb ‘Sponsored’. I’d suggest a more stringent disclaimer, something like ‘Sponsored content; viewer/reader is cautioned to confirm accuracy’, so readers know someone’s paid to have it shown to them. Still if they wish to read, believe, share, or act on it, it’s their choice. This will ensure when the FB link is tweeted or shared on WhatsApp, it continues to be accompanied by the disclaimer.

This is something all responsible publications have been doing for ages. They mention a disclaimer to this effect or simply use words like ‘sponsored feature’ or ‘advertising feature’, or ‘editors’ of this publication were not involved in creation of this content’.

The disclaimer protects the reader’s from being misled, and would leave them with no reason to complain, as Facebook would have acted in a responsible manner. Similar measures must be taken be other media as well.

Will they? The answer to that question is what drives their business, money or ethics.