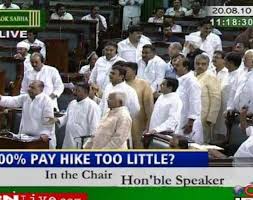 Here are four thoughts to chew:

a. Salary is directly linked to the demand for you – the better you are, the higher is the salary you would command.  Only a few MPs would end up getting a hike if we go by this logic.

b.  You can demand, and get, a higher salary if you are a scarce resource. That is possible only if there are a few like you. Can you think of anyone in current cabinet who might be so rare?

c. As thousands of people would be happy to take on an MPs job (any day!), why pay a salary at all?  Many honorable politicians would be willing to work for free. A more practical thing to do would perhaps be to conduct an auction where MPs can bid how much are they willing to pay to become an MP? The three highest bidders may be allowed to contest elections.

d. MPs have shown us the way on how to get such a salary hike. They’ve demanded it (quite unabashedly); conducted cutting-edge PR with media to present their case; and held-up parliament proceedings for nearly a day, wasting 800 man days of the few days in a year parliament is in session. I think everyone working for the government must embrace this wonderful example set by our esteemed leaders, and demand a 300% hike in our respective salaries as well!

By the way, have you ever heard of someone giving himself or herself a raise? Thanks to our MPs, all of us now have heard it, and seen it as well.