In February 2002, he was judged by Wisden to have played the best One Day International (ODI) innings of all time.

In December 2002, he was chosen by Wisden as the greatest ODI batsman of all times. The ODI ratings comfortably perched him at 1. These rankings were based on the level achieved by the batsmen at their respective peaks.

In 2004, in a poll by ESPN, participated in by 15 of the leading names in cricketing history, he was voted the third greatest ever player after Bradman and Sobers, and the second greatest ever batsman after Bradman. He was also voted the greatest cricketer since 1970 by another poll ahead of Ian Botham and Shane Warne. That poll saw both Botham and Warne vote for him, and in the opinions of both, he is the greatest batsman they ever saw.

In 2006, in a study done by a team of ESPN‘s Cricinfo magazine, he was again chosen the greatest ODI Batsman ever. Former cricketer Derek Pringle also rates him to be the best batsman ever in the history of Limited Overs Cricket.

However, note the following:

By the way, the accolade you read at the beginning are for Vivian Richards, not Sachin.

In my opinion too, it was Richards who was the greatest ODI cricketer ever. Though Viv himself has gone on record to say that “Sachin is the greatest”. Isn’t he being modest?

Richards batted at no. 3 or 4. Yet he managed to score at 47+ runs per match. Sachin, on the other hand, opened and averaged a shade less than 45. A difference of 2 and 1/2  runs per match is huge. (By the way, the difference between Sachin and Rahul Dravid’s ODI average is only 5 runs)

In fact, till Sachin began to open in ODIs, his batting average was not so impressive 31. 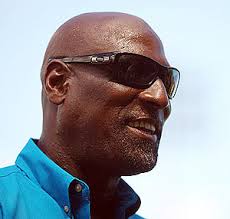 Richards’ strike rate too is better –beating Sachin’s by 3%.

Moreover, we must remember that:

Every single match Viv scored a century, West Indies won the match. Each of those centuries was scored ‘away’ from home grounds.

Sachin, on the other hand, has scored 32 of the 49 centuries at home. And whenever he scored one ‘away’ from home, India lost the match on half the occasions.

Richards has taken 100 catches and Sachin has taken 140 catches –  twice as many catches per match compared to Sachin.

Complete cricketers, both. But Richards was definitely ahead.

Also, Richards was a delight to watch (not that Sachin isn’t) –a combination of arrogance, swagger and sheer brutality.

Yet, media and much of India’s cricket loving population would refuse to accept Sachin is not the greatest! Probably, because most of them were in their cradles when Richards retired – they didn’t actually see Richards blast every bowler into pulp. Unfortunately, there aren’t too many videos on YouTube that can help.

Having seen both Richards and Sachin closely, I believe it’s only our love for India that makes us proudly proclaim Sachin as the greatest. Many experts from other countries too echo the same view. Perhaps they understand – when in India, speak what Indians want to hear.

I’d say Richards pips Sachin, albeit by a very narrow margin. But then, difference between two of the greatest players of our times can’t be more than a whisker:-)