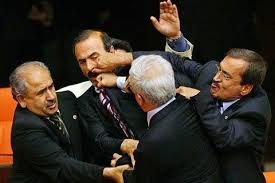 Our class teacher in standard II and IV was a gentleman whom we addressed as Mr. Vohra (fellow FAPSians may recall him). He was a midget of a man – barely 5 feet tall. But at that age, he still was tall enough for us. Ironically, he was a brute. He used three novel ways to punish us: Pull our whiskers; hit the sharp end of the scale on our knuckles, and the third one was to make us slap each other.

This is how the ‘slap each other went’:

If there were at least two pupils being punished, he’d make them stand facing each other, and ask us to slap each other. In the beginning the slaps would be gentle, almost soft brushes on each other’s cheeks. The entire class would be amused, laughing. Then, a slap would come a little hard. This would be returned harder. Soon, the two will be slapping each other really hard, spitting anger with each slap. And Mr. Vohra would command them to continue.

Sorry for this long prologue.

But if you notice, the current slapping between ruling politicians and public are not very different from the charade Mr. Vohra made us play.

Public slaps the ruler (read: charges of corruption); he slaps us back. The slapping continues to get harder, nastier. Media is enjoying, analyzing and commenting. Many in public are amused. Most are disgusted. But there is no end to slapping.

Unfortunately, public can never win, and rulers have the upper hand, like Mr. Vohra. The loser is the country, as it gets weaker and weaker.

The arrest of cartoonist Aseem Trivedi is a new low in this slapping match.