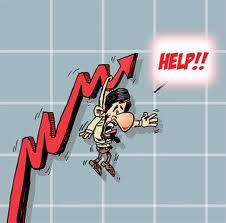 This means, lots of people are demanding products we consume. Being in short supply, their prices naturally rise.

Clothes? Biscuits? Hotel stay? In short supply? Imagine, not having enough movie tickets to offer? And restaurants having to turn people away!

Yet, some products have become cheaper. RBI’s explanation: High demand is pushing up prices. So government is trying to ‘depress’ or reduce demand. By forcing banks to increase interest rates.

This works at two levels:

Banks offer a higher rate of interest on our savings (currently going up to 11%). Encouraging us to save instead of spending. With less money spent, demand automatically comes down. Result is lower prices.

At the second level, the rate at which we borrow for buying consumer durable, personal loans and housing loans get steeper forcing us to postpone major purchases. This has exactly the same impact as higher interest rate for savings.

Thanks to these bold ‘anti-inflationary’ steps, we have far less money to spend than we had a year or two ago.

Yet, you may have noticed price hasn’t come down. On the contrary, it’s gone up. According to a report in TOI today (Aug 4), an average household’s cost has gone up by 25% in last one year alone!

Because Government’s anti-inflationary efforts are increasing the cost of borrowing for businesses as well. Higher borrowing rate has increased the cost of production. This increase has been dutifully passed onto consumers, pushing prices up.

These earnest efforts from ‘all the kings men’ (read: team of eminent economists, including the PM himself) are simply back-firing. Yet, they refuse to change their strategy. In fact, early this week, RBI increased interest rates for 11th time in the past 12 months! The Governor warned “more may follow”.

I believe these efforts are unlikely to work.

Because, price increase is fueled purely by ‘corruption’, or unaccounted money.

The following is the typical route:

Cash goes from private hands (individuals, businessmen, corporate houses) to private hands of officials and ministers in the government. The ‘receivers’ use bulk of the money to buy property, and the rest is spent on gold and lifestyle products like luxury cars, apparel, mobile phones and holidays. The sellers of these properties also spend the new found money in much the same manner – buying new property, gold and lifestyle products. Thus, perpetuating the cycle.

Over the last four five years, such money in circulation has multiplied manifold.

This money is fueling the demand-led inflation.

I bought a property in Gurgaon in the year 2000. I sold it in 2004 at about 30% premium. The same property today – just 7 years later – is being quoted at several crores, about 13 times the price I received!

Single floors in Delhi’s upper income locality – Saket – that sold for about Rs.60-70L about 6 years ago, now fetch Rs.3 to 4 crores. When I made some enquiries from a real estate broker, I discovered over 600 such floors have been constructed and sold in the past few years. (This is in just one locality of Delhi. 600 flats @ Rs.3 crores adds to Rs.1,800 crores). I asked the broker, in all seriousness: “Who are the people that buy such floors?” He simply smiled at my ‘joke’.

Less said of Mumbai the better – as prices just continue to soar.

Luxury car sales have grown an average of 64% per year over last five years (remember, economy has grown only at 9%). Market for luxury products is expected to grow 3 times in next fives years to about $15 Billion (Rs. 67,000).

Wonder:  if people are saving more, and borrowing has become expensive, who is fueling the demand for such high priced properties and cars? And gold? Obviously a few people with lots and lots of ill-gotten money! Read more…

Yet, the government is happily squeezing the middle class (read: you and me).

I’m convinced the government’s choice of action is pure posturing, trying to tell us, “see, how hard we are trying.” They know if they do the right thing, half the politicians, their relatives and cronies will be in jail.

What’s the right thing for government to do?

Crack down on all high value property transactions.

We just need to establish funds trail for all property transactions of Rs.1 crore conducted over the last 5 years. By simply asking every buyer and seller involved in these transactions to submit the ‘source’ and ‘use’ of all their funds over last five years, along with their IT returns and investment details.

Is this difficult to do?

I believe it’s very easy. Because much of income tax paper work is now outsourced to Infosys. The system has become extremely efficient. In fact, this year, the Income Tax department has even refunded the excess tax collected to everyone – a first ever.

Here’s how I propose this should be implemented:

I believe this will kill corruption in its track. Because the ‘root’ would have been attacked. Moreover, it will have the high and mighty running helter-skelter (what fun!) while the media will have a ball!

Till a strong Jan Lokpal Bill is enacted, such an action could convince people that Government is serious about rooting corruption out. And it will, I’m quite sure.

PS: However, one question still puzzles? Why has price of food products – atta, daal, vegetables – gone up so much? Their price cannot be influenced by corruption money? There are two reasons I can think of: